Welcome to our shop! -Free shipping starting from 80 eur 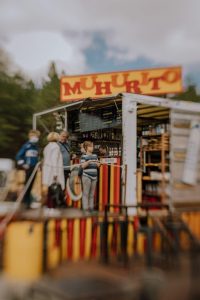 Behind Muhurito is a young man from Muhu, Kaidar, a world traveller and a jack of all trades.

Kaidar has been on-stage in Estonian theatres, taught English in Poland, managed a pub in Ireland and travelled in Asia with a home base in the jungle on a small island in Thailand.

Love for Muhu island has kept drawing him back home again and again.

6 years ago he decided to set up a pop-up street food cafe called Muhurito in Liiva. At that point, he did not even imagine how well the islanders and guests from the mainland will receive his delicious and exciting burritos.

In addition to that, Kaidar has become a highly appreciated employer and young people want to come work for him again and again during the summer seasons.

Nowadays, Muhurito is not simply a pop-up cafe. Muhurito has grown into a brand that offers great food but also sauces with varying spice levels and warming mulled wine during chillier days.

Check out the product range and buy Muhurito

This website uses cookies to improve your experience while you navigate through the website. Out of these, the cookies that are categorized as necessary are stored on your browser as they are essential for the working of basic functionalities of the website. We also use third-party cookies that help us analyze and understand how you use this website. These cookies will be stored in your browser only with your consent. You also have the option to opt-out of these cookies. But opting out of some of these cookies may affect your browsing experience.
Necessary Always Enabled
Necessary cookies are absolutely essential for the website to function properly. This category only includes cookies that ensures basic functionalities and security features of the website. These cookies do not store any personal information.
Non-necessary
Any cookies that may not be particularly necessary for the website to function and is used specifically to collect user personal data via analytics, ads, other embedded contents are termed as non-necessary cookies. It is mandatory to procure user consent prior to running these cookies on your website.
SAVE & ACCEPT
×
×

Thanks for subscribing to the newsletter

Please check your email. You will receive a confirmation letter with a discount coupon shortly.